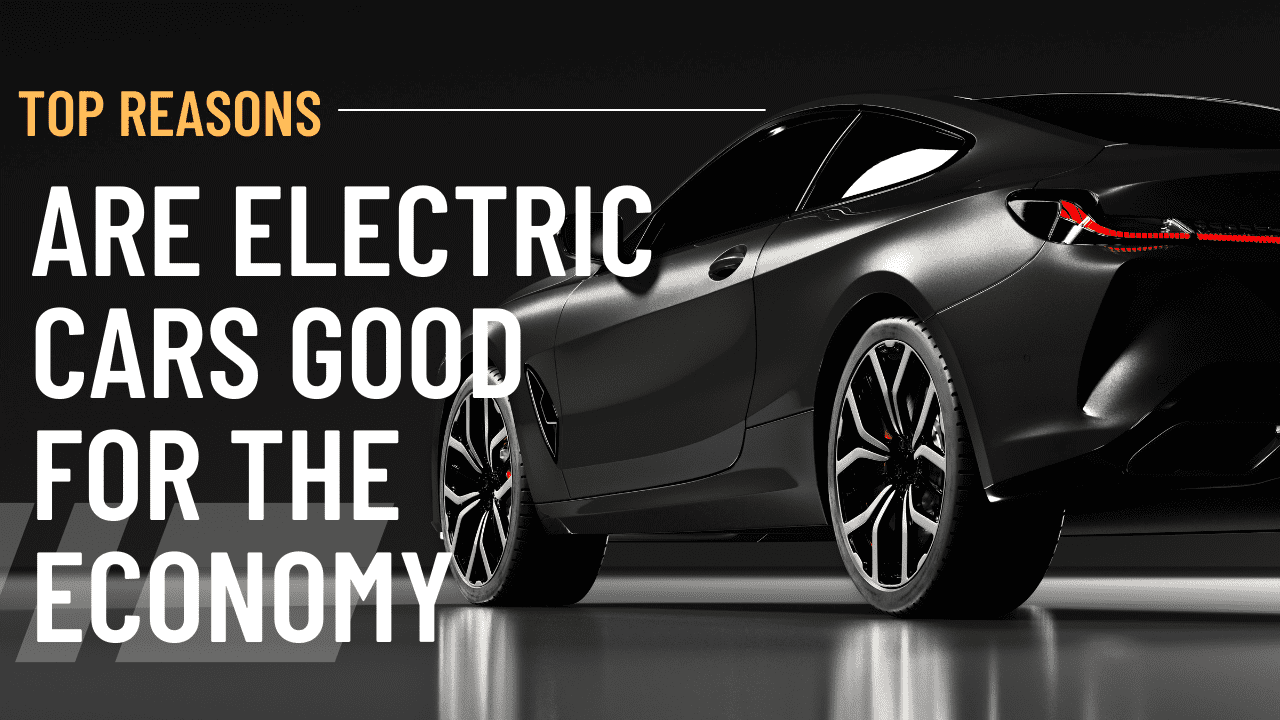 Electric vehicles have made their way into mainstream popularity thanks to the efforts of Tesla. EVs have a profound positive impact on the environment compared to gasoline-powered cars.

This isn’t to say that the market for EVs is perfect – far from it. For one, electric car batteries are not easy to dispose of. Secondly, the manufacturing process for EVs releases a lot of GHG emissions.

Moreover, the energy to charge your battery comes from questionable sources. Depending on your location, it may come from renewable energy or coal. In any case, you can never be quite sure.

Despite what the skeptics may say, the benefits of EVs overwhelm its negatives. Across the entire world, EVs are saving money, time, and GHG emissions for cities.

Manufacturers are also pivoting to more efficient and productive processes for EVs and their batteries.

This represents less than 1% of the 250 million gasoline-powered cars on US roads. This suggests that the road to electric cars is still paved with numerous obstacles.

But what little data we have indicates that their adoption is economically and socially advantageous.

How Electric Cars Benefit the Grid

A major benefit of electric cars is the power grid – something that many stakeholders ignore. The power grid only operates at a capacity of under 50%. This is because the system has been built to operate at peak demand.

The only problem is that peak demand for electricity lasts a few hours every year. The potential for the power grid goes wasted and so does its revenue.

This is the equivalent of building massive Olympic stadiums that fill up once every year. These stadiums go underutilized the rest of the year.

The power grid’s low usage factor represents an enormous opportunity for savings. Power plants can generate more electricity through transformers, substations, and feeders based on various factors. All this can happen without overburdening the existing electrical distribution network.

There is no additional cost to the grid outside of marginal overhead costs. These operating costs are almost negligible for renewable energy such as solar and wind.

At the same time, electric vehicle owners will pay for the power generated. This means that revenues would grow outside of peak times. In turn, profits for power companies will increase because operating costs are extremely low.

EV owners charging their cars overnight at home inadvertently lower the power bill for everyone.

A typical EV uses nearly 60,000 kWh in its lifetime. This can significantly increase revenues for the power grid. This is confirmed by this South Korean study. The study found that the adoption of EVs can improve the power grid’s load factor. This will, in turn, reduce the power supply cost.

Taxes paid by utility companies can be used by local governments to benefit their communities.

The major advantage of EVs is that they are spurring more economic activity locally. Whether this includes money saved on gasoline prices or in bills paid to power companies.

In contrast, the fueling price for conventional cars flows out to beneficiaries out of state. These beneficiaries, mostly residing out of state, include refiners, oil producers, and gasoline distributors.

However, the economic benefits of EVs go beyond the grid, as we will discuss below.

Read Why Are Electric Cars so Expensive?

To start off, the fueling costs for EVs are up to 50 percent lower. The retail prices for EVs are high – sometimes much higher. Given the lifetime fuel cost for EVs and gasoline-powered vehicles, EVs are significantly cheaper.

In fact, some experts argue that fuel savings for an EV are over $10,000. Furthermore, the maintenance expenses for EVs are significantly lower compared to gasoline-powered vehicles.

This makes sense when you think about it. There are so many moving parts that EV owners don’t have to worry about. These include:

Moreover, there are few components in EVs that can fail. Outside of costs associated with batteries, there is very little that EV owners worry about. Speaking of which, EV batteries are becoming cheaper as manufacturers become more efficient with processes.

The price of owning an EV is significantly lower compared to gasoline-powered vehicles. Some places in the world provide subsidies for EV purchases. This further drives down the total cost of owning an EV during its lifetime.

Good for the Environment, Good for Your Wallet

Climate scientists are some of the biggest advocates for vehicle electrification. They argue that adopting EVs is one of the best ways of reducing GHG emissions. To put things in perspective, the US transportation sector is the largest contributor to GHG.

EV’s lower maintenance costs and price of fuel make up for its higher retail price.

This isn’t to say that the manufacturing process doesn’t contribute to GHG emissions. However, this will get better with time as the energy grid becomes greener.

An MIT team confirmed this relationship. They found that the lifetime cost of Tesla Model 3s and Nissan Altimas were similar. A Nissan Altima usually sells for around $12,000 upfront. This is true even though the federal tax incentive for EVs has ended for Tesla.

Toyota’s Hybrid RAV4 SUV is also cheaper in the long run compared to conventional RAV4s. The RAV4 is the best-selling SUV in the US.

It is worth noting that the fuel prices depend on where the buyer lives. States such as Hawaii and Alaska tend to have very high rates. However, states in the West and South tend to have lower electricity rates.

Despite this, a report from the Union of Concerned Scientists found that EVs were cost-efficient. The price of charging an EV was cheaper compared to using gas across major cities.

This isn’t to say that the upfront cost of EVs is cheap. For many motorists, electric vehicles are a luxury commodity. The federal government’s tax credit for EV purchases does not apply to used cars.

This means that only relatively wealthy motorists have access to electric vehicles. This may soon change as parts of the US offer more rebates to motorists.

Read Should I Buy a Used Electric Car?

Electric cars will spur new economic activity. This is a far cry from the skeptics who are concerned that EVs are bad for low-skilled factory workers. The prediction comes from a Volkswagen executive who argued that EVs require less labor.

It is further argued that EVs could upend the jobs of 135,000 specialists. They make engines and transmissions for gasoline-powered vehicles.

This has had major ramifications for some workers. For example, General Motors closed its assembly plant in Ohio. This disrupted the lives of nearly 3,000 workers. Their battery plant is employing a fraction of the workers at lower pay.

Does this mean that workers in this market are doomed? This is not the case.

GM closed down its plant because it made smaller cars that did not have demand.

However, the automaker allocated a $30 billion budget to EVs. This will spur up new economic activity and require more workers. GM is also opening its plant in Detroit that was once idle. The plant will make EVs and electric pickups.

Read What to Do When Your Electric Car Runs Out of Charge?

Tesla is building its massive factories, known as Gigafactories around the world. These factories are expected to create up to 15,000 new jobs.

Much of the hype around jobs is created because of promises to the government. Even so, there are thousands of new vacancies being created for workers.

Tesla continues to receive orders for the Tesla Cybertruck.

Once these Gigafactories complete construction, it will create even more ‘indirect’ jobs. Business people describe this phenomenon as a ‘trickle-down’ effect of the Gigafactories. For example, nearly 50 new companies will move in close proximity to the Texan Gigafactory.

This will be done to help keep Tesla maintain a short and efficient supply chain. Tesla is spending significant amounts of money on their Berlin Gigafactory. This is opening up work for Chinese laborers.

Tesla’s Gigafactory in Gruenheide, Germany will add nearly 12,000 workers upon completion. This isn’t to say that the recruitment process for Tesla has been smooth-sailing. The carmaker has run into several roadblocks with its recruitment process because of salary disputes.

For example, Tesla’s rival in Germany, IG Metall offers a 20% higher wage. This is why local Germans are not interested in switching to Tesla.

Regardless of differences in worker compensation, the job-generation potential of electric vehicles is undeniable.

Read Why are Tesla Electric Cars Good for the Environment?

Workers – with and without – college degrees will find new work in the EV industry. Ford and SK Innovation (a battery maker) are making new assembly plants and battery factories.

Together, these facilities will add 11,000 workers. GM, in partnership with LG Chem, will prop up four new battery plants. The joint venture will add nearly 5,000 new workers.

Engineers from disciplines like electrical, chemical, and renewable will find jobs that didn’t exist before. There are opportunities for under-skilled labor too

Automakers like GM are collaborating with institutions and universities to train workers in making batteries. Most of these workers may not have college degrees.

The Global Impact of Electric Vehicles

The market for electric vehicles is changing the world’s economy. This is primarily due to demand across the world, such as China, Europe, and the US.

EVs now represent 9% of the global market. It should be mentioned that automakers are struggling with supply chain snags. For instance, shortages of semiconductor chips and Li-Ion batteries are hurting EV sales.

Yet despite these hurdles, EV sales are entering a remarkable new phase. It is expected that EVs would represent 15% of the auto market in the future.

Let’s take a look at a few statistics. EVs are set to:

Revenues could shoot to $1 trillion per year if EV prices fall below gasoline-powered cars. Sales of electricity and charging services also represent a part of the revenue.

Taking a Look at the World’s Billionaires

A cursory look at the latest ranking of billionaires reveals a trend. The vast majority of new billionaires have investments in batteries, electric vehicles, and renewables.

Elon Musk, the CEO of Tesla has $234 billion – making him a ‘green’ billionaire. All these statistics drive home the fact that electric vehicles are boosting economic activity.

True, there will be layoffs, but the tradeoff will help thousands seek new jobs. Besides, new training centers will allow workers to acquire skill sets to enter the EV market.

The market for electric vehicles is still in the nascent stage. But Tesla and other carmakers are leading the change to an environmentally friendly future

Once the world adopts EVs in droves, it will drive incredible benefits for the economy. From creating more jobs, both direct and indirect, to boosting global revenue. The potential for EV is virtually limitless.

But there will be a few roadblocks along the way that must be overcome. These include regulatory difficulties, supply chain problems, and steep prices.

With that said, more competition and improved manufacturing processes will drive prices down. Electric vehicles will become more accessible to the general public and government.

It is also expected that public transport and railways will also jump on the EV bandwagon. This will have an enormous impact on the economy. However, this development is still a few years away because of the prohibitive costs.

Did you find this article to be informative? Let us know your thoughts in the comments below.