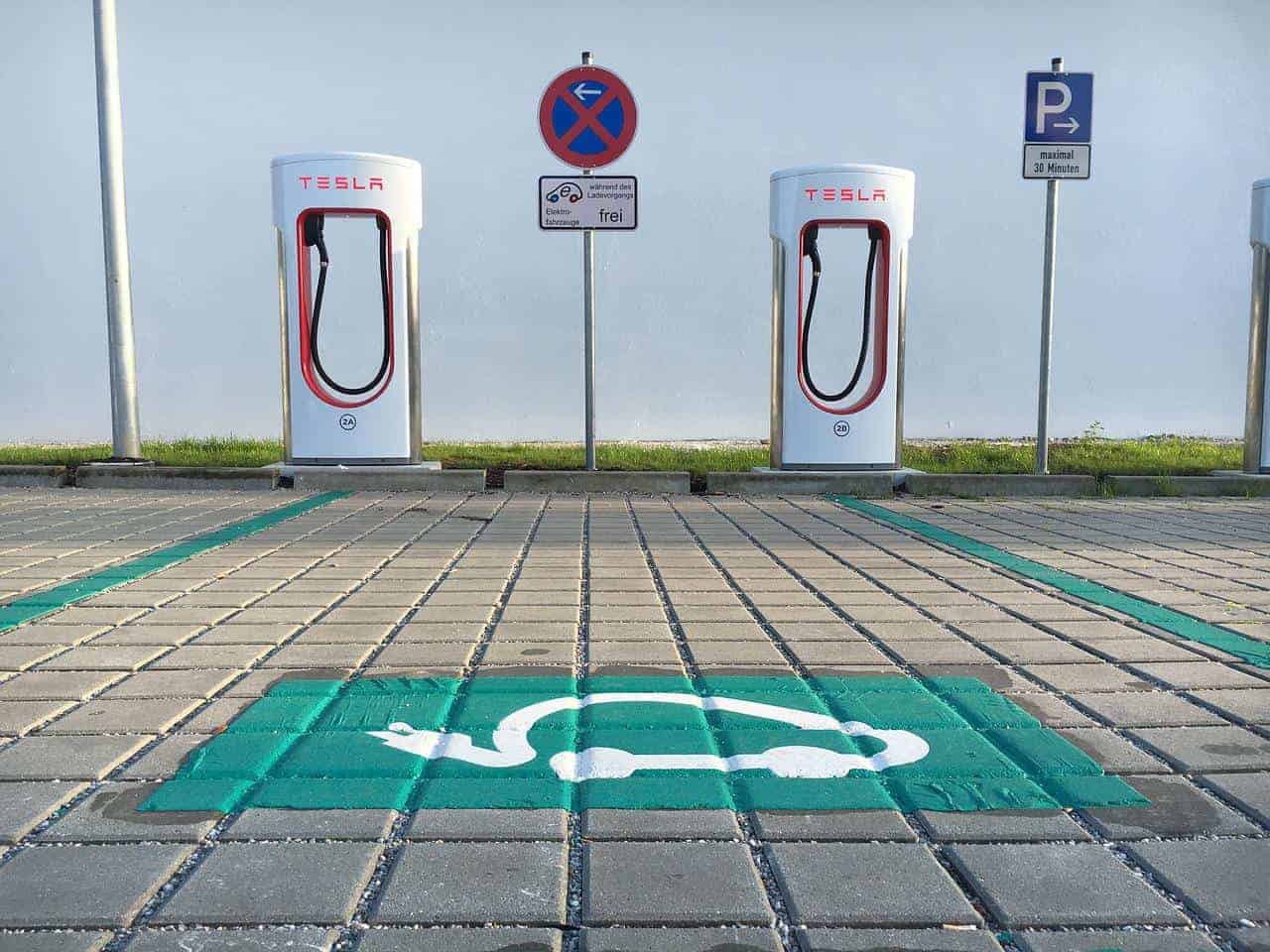 The idea of using Tesla superchargers is lucrative for non-Tesla drivers. This is because there are over 25,000 stations available worldwide. This is the biggest Supercharger network by a stretch. Moreover, the Superchargers are extremely fast compared to the competition.

Note that compatible Superchargers must have CCS2 connections to work with non-Tesla EVs.

Ensure that the Supercharger has CCS2 connection to charge your non-Tesla vehicle.

Tesla Superchargers are designed to charge electric vehicles like Teslas in less than one hour. They use super-powerful 480-volt chargers, making them ideal for longer road trips.

A Supercharger can add nearly 150 miles of range to your EV.  Exact timelines vary based on the make and model of the electric car.

You can use Tesla’s Trip Planner to learn about nearby Superchargers and plan accordingly.

Non-Teslas Could Charge at Teslas Before 2021

Non-Teslas could use Tesla superchargers before 2021, but the process was not nearly convenient.

It was slow, difficult, and came with a bevvy of restrictions.

More specifically, non-Tesla motorists had to use a special adaptor to use the charging stations. These adaptors were lower powered.

They could use Tesla-made equipment and tools to charge their EV.

This means that drivers no longer need an adapter.

Read Can I Charge My Electric Car in the Rain?

Popular Adapters That Were in Use

Drivers had access to plenty of Tesla-to-J1772 adapters from different vendors. This was useful for drivers who could not use a Tesla supercharger. The most popular brands were Lectron and TeslaTap.

Each brand offered adaptors that looked like dongles. They connected Tesla and J1772 sides with relative ease. In addition, TeslaTap offered a cable-less adaptor that was much more compact.

All these loopholes became redundant until the Supercharger announcement.

Musk mentioned in his Tweet that Tesla developed a proprietary charger out of necessity. This charger was necessary because electric vehicles were still a novel concept. There was no standard that Tesla could follow. For a long period, Tesla was the only manufacturer of electric vehicles.

Tesla gradually expanded their compatible Supercharger network around the world. This made it especially lucrative for non-Tesla owners.

Read Where Can I Charge My Electric Car for Free?

Why Non-Tesla Owners Should Keep an Adapter Nearby

Suppose you installed a Tesla Wall Connector and use it to charge non-Tesla EVs. You probably don’t want to buy a new wall charger for your new non-Tesla EV.

You cannot change the charger type on the wall either.

This is where your J1772 connector comes in. It uses level 1 and level 2 charging. The adaptor allows you to charge the ID.4 from the Wall Connector.

The adaptor also provides you with access to thousands of Tesla Destination Chargers.

Read How Many Watts Does An Electric Car Use?

The Difference Between Destination Chargers and Superchargers

There are over 4,500 Destination Charging stations in the US. These can be found at various restaurants, hotels, and parking garages. Destination Chargers are relatively slow and require drivers to be patient.

It will take cars a bit longer to fully charge.

However, this can be a good thing because slow charging is healthier for the battery.

Of course, non-Tesla drivers can use these charging stations. However, they will need to use a compatible adapter discussed above.

Idle fees do not apply to fully charged electric vehicles that don’t drive away. This is probably because Destination Chargers are found in rural areas. They are less likely to have a line of EVs waiting their turn.

Tesla Superchargers are, as the name suggests, very fast.

Over 30,000 Superchargers are available worldwide. They can fully charge a battery in under 15 minutes.

These Superchargers can be found throughout highway locations for convenient access to EVs.

The downside is that fast charging can damage EV batteries. That said, Tesla Superchargers can use slow charging to protect the battery.

The other drawback is that Superchargers are not.

Read How Many Solar Panels Are Needed to Charge a Tesla?

What You Should Know About Tesla Superchargers

Owners of non-Tesla EVs are required to use the Tesla app. The minimum version of the app is 4.2.3 or later.

In the app, the user should tap “Charge Your Non-Tesla” and proceed to pay. This would allow them to use the charging station.

Some Superchargers also allow non-Tesla vehicles to use CCS common connection. Tesla has not announced official rates for using their Supercharger. Reports indicate that the Supercharger rates vary from site to site.

Let’s take a look at the standard charging rates for Tesla cars.

Non-Tesla cars will have to pay additional fees for using these services. In fact, electricity rates for non-Tesla EVs may be higher.

Where to Find Tesla Superchargers

Finding a Tesla Supercharger is relatively easy. This is because Tesla keeps a map of all Superchargers on their website. You can also use the Tesla app to reach your nearest Supercharger location.

The app also provides updates on the amenities available at each Supercharger. This includes Wi-Fi, restrooms, charging bays, and opening hours. The app can also inform you if the Supercharger bays are available for use.

Read What is Tesla Destination Charging?

How to Use a Tesla Supercharger

You can use Tesla Superchargers with a non-Tesla EV if it has a CCS2 adaptor. Simply park next to the machine, plug it in, and allow the cable to dock. The Supercharger will begin to deliver power right away, as indicated by a green logo.

You can track the progress of the recharge on the car’s display. Other information includes the rate of recharging, number of miles added, and total cost. You can retrieve this information from your phone (Tesla app) if you leave the car.

In other words, you may not get advertised charging speeds if nearby cars are connected. Charging can also slow down once your battery level increases. Charging is at its slowest if you hit 80%. At this point, the charging speed is so slow that you are better off unplugging.

As mentioned earlier, it is not recommended to use Superchargers very often. Excessive usage of Superchargers will deplete the lifespan of your EV battery. Lithium batteries are simply not designed to be recharged at a faster rate.

Always use slower AC charging if you are driving for shorter trips.

Try not to be Idle at the Charging Stations

Tesla punishes car owners for unnecessarily parking at their charging stations. The company will charge an ‘idle’ fee for fully charged Teslas. The idle fee goes into effect if more than 50% of parking spots are taken.

Make sure to keep an eye on the app to avoid the fee. You won’t be charged if you leave after being notified that charging is complete.

Read How Many Amp Hours is a Tesla Electric Car’s Battery?

Tesla Charging Stations Used to be Free Until…

Tesla no longer allows its own EVs to use the charging stations for free. This means that non-Tesla owners will have to pay to charge their EVs.

Note that Destination Chargers are expensive for smaller businesses. They often paid unreasonable installation prices to have them installed. It is expected of the EV owners to make some form of contribution to owners. This could be in the form of booking a room or buying a meal.

This is why most outlets require a fee for using the charger.

Sometimes the staff may be unsure about how much to charge for using the Charger. In this case, EV owners should tip generously and not underpay for using the service. Tesla or not, EV owners are already realizing huge savings compared to petrol cars.

Tesla Superchargers are not available everywhere.

A better option for non-Tesla owners is to set up a home charging station. This would make it more convenient to charge their EVs.

The price of building a home charging station depends on the vendor. Other factors include the house itself and the health of the wiring. Older residences will require a major upgrade to facilitate charging.

Newer residences should be able to handle the charging. In this case, a non-Tesla EV can use level 1 charging with a standard plug.

It is recommended to charge an EV using a level 2 charger. This will increase the longevity of EV batteries.

Most plugs use about 12 Amps of electricity. This will provide most drivers with enough charge to drive around.

Electrical upgrades may be needed to facilitate higher charging levels. The cost of hiring an electrician may be very high. In some cases, the costs of parts and labor may exceed $2000.

Drivers will have to weigh the pros and cons of installing a home charging station.

The Push for a Standardized Charger

However, in the coming years, Tesla will add CCS2 connectors to new Supercharger stations.

Tesla is planning to introduce a superior version of the Supercharger. This machine, known as the Megacharger is designed to be used with all-electric trucks. It is unclear if non-Tesla EVs and non-Tesla trucks can use the Megacharger.

Tesla has big plans for their Megacharger. They want to offer 400 miles of range after only 30 minutes of charging. Rumors have it that a single Megacharger can offer speeds of up to 1MW. The fastest Supercharger only has speeds of up to 250kW.

That being said, semi-trucks tend to be incredibly heavy. It makes sense to draw from a larger power source to charge heavier vehicles.

So, can your electric car use Tesla charging stations?

The answer boils down to the type of charging station and your non-Tesla EV. It may not be possible for certain EVs to use any charging stations at all. Make sure to check your non-Tesla’s compatibility with chargers ahead of visiting one. Drivers living in ‘pilot’ countries like the Netherlands can charge their non-Teslas using a Supercharger.

You may like the following Tesla electric car articles: