Electric Bikes have helped the world step into the future of convenient commuting. Their global popularity has contributed to almost $40,312 million in sales in 2019. It’s safe to assume that it will continue to grab people’s attention, compelling them into buying one. 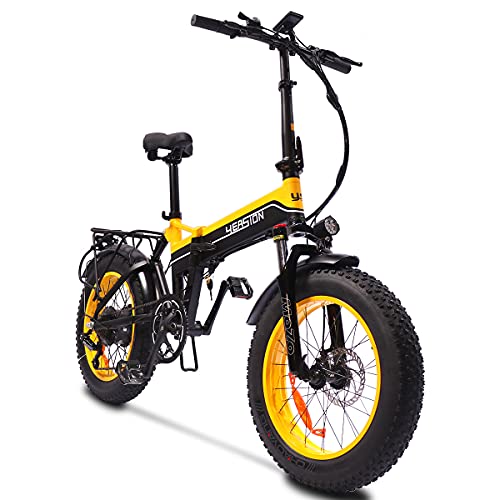 A 1000W electric bike will undoubtedly be super-fast. However, its maximum speed will depend on many different factors.

How Fast Would a 1000w Electric Bike Go?

The speed of an electric bike mainly depends on its battery size. The most common battery pack sizes are 250W, 500W, 750W, and 1000W. There are also some 1500W battery packs in the market.

Electric bikes with high-capacity battery packs such as 750W or 1000W are fast. These batteries store more charge and can convert it to kinetic speed quickly.

Hence, the general rule here is that the higher the wattage, the more the power. As a result, higher would be the electric bike’s speed.

The table below shows different e-bike powers and their respective top speeds on a flat landscape.

Although power is the main determinant of an e-bike’s speed, other factors also matter.

Other factors impacting an electric bike’s speed are:

Read How Fast Can You Go On An E-Bike?

Factor’s Affecting the Speed of an Electric Bike

The main factor that affects an electric bike’s speed is its power. Hence, a 1000W electric bike is a high-speed electric bike. However, more factors can play a part in determining a 1000W e-bike’s top speed. 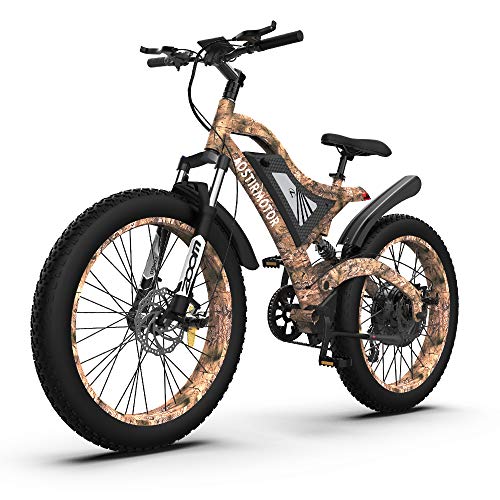 There are two main types of electric bikes, one that relies heavily on pedal assistance, and the other works as a motorbike.

Electric bikes that depend on pedal assistance have their top speed depending on their rider. The faster the rider can pedal, the more speed their electric bike would have.

These electric bikes have three pedal assist modes. The speed of an e-bike going on a low-pedal assist level would depend on the rider. The more the pedaling, the higher the speed.

The middle-pedal assist level requires some assistance from the rider while also using the electric aid. Such an e-bike’s speed would go faster than a rider’s pedaling ability.

The high-pedal assist level allows the rider to have high electrical assistance. The e-bike would be able to go on its speed on this level.

The table below shows the Bosch e-bike modes and their electrical power assistance.

With the increasing popularity, innovations in electric bike technologies make headlines regularly. To compete in the growing market, manufacturers work hard to add superior features to their e-bikes.

Many modern recent electric bikes now have throttle mechanisms. This mechanism allows the electric bike to work as a motorbike, which means the rider’s pedaling is no longer required.

If an e-bike comes with a throttle mechanism, its speed would depend on its battery power. Electric bikes without this mechanism would have their speed impacted by other factors.

Check, How Much Does It Cost to Rent An Electric Bike In the United States?

The total weight of an e-bike plays an integral part in determining its top speed.

The more the electric bike weighs, the more power it needs to keep it going. Similarly, if the rider is bulky or is carrying luggage, the e-bike would need more power.

The heavy electric bikes in the market can weigh up to 50+lbs. However, some market electric bikes come as light as 19lbs. On the other hand, a solid 1000W battery pack is discouraged for super lightweight bikes for safety reasons.

The inclinations and roughness of terrain can heavily impact an e-bike’s performance.

If the terrain is super rough and has a steep slope, the e-bike would need more power. As a result, speed would automatically be slower.

Electric bikes with 750W, 1000W, or above can maintain their speeds on rougher terrains. Engaging your electric bike’s throttle mechanism lets the rider obtain a maximum speed.

The speed of your 1000W electric bike on rougher terrain will also depend on: 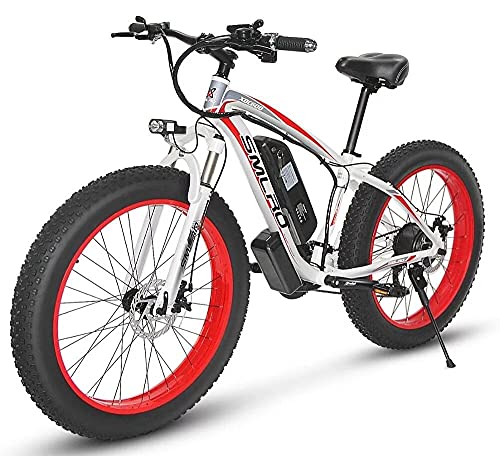 The electric bike’s tire’s condition will impact the maximum speed the e-bike can go on. An e-bike will not maintain higher speeds if the tires are sticky, aged, or worn out.

Similarly, high speed is not possible if the electric bike’s tires are not inflated properly.

At speeds higher than 30miles/hour, the effect of the wind is very strong. The reduced friction will keep an e-bike from going too fast if it is raining.

The legality of a high-powered 1000W bike is still under discussion in many American states. Some states allow high-powered electric bikes on the road. In contrast, others have strict wattage restrictions.

Some states like Florida have no electric bike wattage restrictions. One can ride an electric bike powered at 1000W or even 1500W without an issue.

On the other hand, almost sixteen states, including Washington, Utah, Pennsylvania, Colorado, etc., have stricter restrictions. Their rules permit only 500W electric bikes on the road. These restrictions are due to the risks associated with riding a high-powered fast e-bike.

Your 1000W electric bike would become illegal if it falls in either of these three categories:

A 1000W e-bike rigged to go at speeds higher than the allowed limit would become illegal.

Read How to Transport an Electric Bike

Driving a car instead of riding a bike at the same speed has different risks. If your car crashes at a 35mile/hour speed, only your vehicle will sustain most of the damage. Chances of your safety are high.

On the contrary, if you get in an e-bike accident at 35mile/hour, it could be fatal. This safety risk is the reason why many American states have wattage restrictions.

If you purchase a 1000W electric bike, chances are you love adventure. Going at high speeds and hitting throttle can be tempting. However, your riding choices can put you and other pedestrians in danger.

Higher speeds require more vigilance and control. Such high speeds might be too much to handle for a novice rider. One wrong turn or break could cause a serious accident.

E-bike accidents commonly lead to bone damage and fracture. They could also result in brain injury and deep body wounds. With speeds as high as 35mile/hour, the severity of these injuries would increase.

A recent report states that e-bike and e-scooter accidents have increased by 70% in recent years. Most of these injuries include broken limbs and brain and neck damage. According to CPSC, seventy-one fatalities have also been recorded. 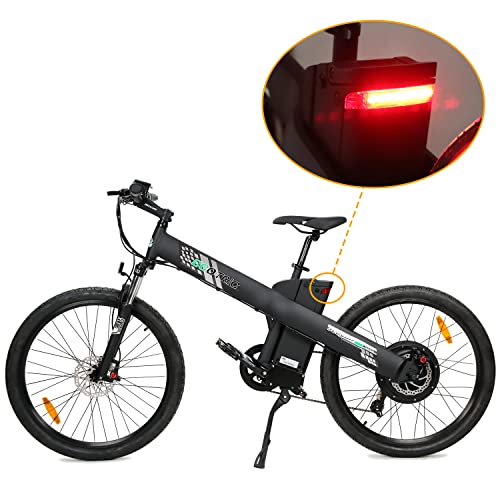 Read How To Lock An Electric Bike

Is a 1000W Electric Bike the Best Available Option?

The answer is not that simple. For rougher routes and high-speed adventures, a 1000W electric bike is excellent. It can offer unparalleled speed and is not easily affected by changing weather.

However, such a fast-electric bike has its limitations. The first major downside is its limited legality. With barely six to eight states allowing its usage, you cannot take your electric bike everywhere.

Moreover, airplanes limit the lithium battery power size they will carry. With a 1000W battery, you will not have the option to transport your e-bike by air.

In addition, higher speeds increase the risks associated with rider injuries and pedestrian safety. If you are not an adventure seeker, better e-bike wattages are available in the market.

A 750W electric bike is also considered a high-speed e-bike. Compared to a 1000W e-bike, a 750W e-bike has speed, weight, legality, and safety differences.

A 1000W electric bike is great for the fast ride. If you want a fast-speed e-bike, you can also choose a 750W e-bike. Its maximum speed would be 28 miles/hour, which is still pretty high.

Only a handful of American states allow a 1000W electric bike on the road. When you choose a 750W e-bike inside, you have the opportunity to ride in more locations. This factor makes your 750W electric bike a more practical purchase.

With a lesser top speed than a 1000W e-bike, a 750W e-bike is safer. Injuries and damages can be less severe in comparison. Hence, with a 750W e-bike, you can enjoy a high-speed ride without compromising on safety.

Read Can I Get an Electric Bike on the Cycle to Work Scheme?

When is a 750W Electric Bike the Better Option?

Both the 750W and a 1000W e-bike are high-powered and fast e-bikes. Both e-bikes promise a thrilling, fast ride.

However, for certain situations, a 750W e-bike becomes the better option.

Commuting daily, either to work or the market, does not need such high speeds. For this purpose, a 750W e-bike would easily suffice.

Furthermore, a 750W battery pack would be more cost-effective. Not only will the purchase price be lower, but the charging cost would also be lower.

If you want a thrilling e-bike ride for rough and adventurous landscapes, get a 1000W e-bike. It offers you a speed of 28-35miles/hour and can maintain its momentum on slopes.

However, a fast e-bike has limitations regarding where you can ride it. If you want to face less regulations, go for a 750W e-bike. It is also much safer than a 1000W e-bike. Moreover, a 250W or 500W e-bike is better for daily leisurely commuting.   It all comes down to your e-bike usage and the risk you are willing to take.