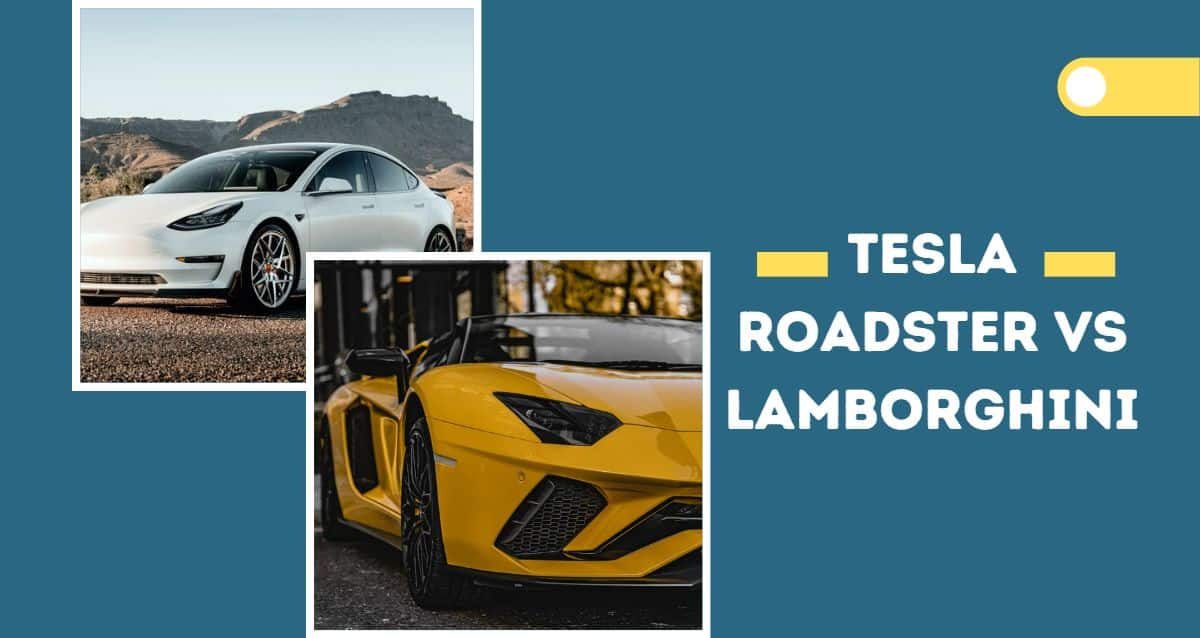 The Tesla Roadster is a long-awaited release. The two-door car was planned to show up in 2022, but consistent delays mean it will release in 2023. We will compare the unreleased Tesla Roadster with its biggest competitor, the 2023 Lamborghini Aventador Roadster.

As we currently stand, you can win a drag race against the Aventador S Roadster with a Tesla Model S Plaid. If a sedan can beat a full-fledged sports car, what will happen when they are both on a level playing field?

It had a top speed of 125 mph and went from 0-60 mph in 4.2 seconds. These numbers don’t mean much today but were very impressive for an electric car back in the day.

The original Tesla roadster didn’t stay in production. Although only a few thousand roadsters were sold, there were always rumors about it returning. These rumors were confirmed when the car was officially unveiled at the 2017 Tesla event and the Tesla Semi Truck.

People are interested to see what the company can accomplish now. It is safe to say that the Tesla Roadster 2023 is a highly anticipated release.

Let’s compare the Tesla Roadster vs Lamborghini from the information released.

The Tesla Roadster will have three carbon fiber-wrapped motors. Two for the back axle and one for the front axle. The multiple motors mean it’s an all-wheel drive.

The carbon fiber-wrapped motors are revolutionary as they can create a stronger magnetic field without breaking apart. Elon explains that carbon fiber essentially holds everything together.

The Roadster will have double the battery power as the Model S. That additional battery power will augment performance and increase the range. The New Tesla Roadster has a top speed of more than 250 mph.

Unlike other luxury supercar companies that have followed Tesla’s lead and started incorporating electric engines in their vehicles, Lamborghini wants to stick to its roots.

The 2023 Lamborghini Aventador SVJ Roadster will have a 6.5-liter V12 Engine producing 760 maximum horsepower and 530 pounds-feet of torque. The engine lies at the car’s center, lowering its center of gravity. This car will have a 217 mph top speed.

The Roadster enters the realm of hypercars with a sub-nine-second quarter mile rate.

The 2023 Lamborghini Aventador SVJ Roadster will go from 0-100 mph in 2.8 seconds. You may get a better start with the Aventador, and you’ll surely need it while racing against the Tesla Roadster, which has a faster top speed.

Luxury sports super and hypercars like to maintain a higher quality and exclusivity. Companies produce a limited number each year. They also produce even fewer special or advanced models and editions.

Tesla has informed the public of its decision to produce only a few Roadsters annually. This car will be the first time the company has done this. They started taking reservations for two roadster versions, “Standard” and “Founder’s Series.” As of now, you can no longer reserve the Founder’s Series Roadsters.

There is a special Space X Package roadster as well. Rumors are flying around that it can hover or fly in short leaps using some technology borrowed from SpaceX. We cannot confirm that, but we can guarantee that the SpaceX Package Roadster will go 0-60 in 1.1 seconds.

The Roadster was supposed to go into production in 2020 but will come out in 2023, six years after being announced.

At the same time, Lamborghini is producing a limited number of a special version of the Aventador known as the “Ultimate.” There will only be 600 produced worldwide annually. The Ultimate might be the fastest and last purely gasoline-powered car produced by the company.

A familiar sound fills the air when you watch a racing movie or visit a car show. The sound of an engine revving is a delicacy to the ears of a sports super and hyper car driver.

You must have witnessed the iconic engine revving battle before a race at least once on screen or in real life. The first thing many hypercar enthusiasts do when they see a car is to rev the engine and appreciate the sound.

Regarding which car sounds better, the winner is the Lamborghini. The Tesla makes a noiseless run. That is a deal-breaker for many car lovers.

While some think that revving engines before a race is childish, others can’t imagine driving without hearing the sounds of an engine humming. One of the biggest jokes some people make about the upcoming Tesla Roadster is how they can’t wait to listen to that car purr.

The Tesla Roadster will sport a 200kW battery pack between the front and rear motors. That is double the power supplied by the Model S. Part of this abundant battery energy will make the car run faster and achieve top speeds above 250 mph. The Tesla battery lowers the car’s center of gravity since it lies in the middle of the vehicle.

The Lamborgini Aventador 2023 is purely a gas engine vehicle. There is talk of newer versions being Hybrid vehicles.

As we all know, Tesla manufactures 100% electrically powered vehicles. That is as fuel efficient as you can get. The original Tesla Roadster could go 220 miles which is nothing compared to the range of the second-generation Model. It can go 620 miles on a fully charged battery. We don’t usually use kilometers in America. However, it is interesting to note it is the first electric car to go over a thousand kilometers on a fully charged battery.

In contrast, the Lamborghini Aventador is one of the most fuel-inefficient cars on the market. Driving an Aventador is advertising that you do not care about gas money. The gasoline-guzzling road-beast gives you 9 MPG of premium fuel in the city and 15 MPG on the highway.

The 2023 Lamborgini Aventador will be available in the following colors:

As for the Tesla Roadster, the company has confirmed that they will have special colors as they did for the first-generation Roadster. So far, we know that red and matte black will be available.

Tesla upgraded their interior game with the Model S Plaid, which they released this year. The upholstery, screen orientation, and driver instruments were much better than in previous models.

We look forward to seeing the interior and how it is similar or different from its competitors or previous models.

The Tesla Roadster will probably have a screen like all Tesla vehicles do. We can’t wait to see how the interface will be differently designed to match a performance hypercar.

Usually, Tecla’s have limited physical controls but allow you to change anything you need on the screen. That method will be too time-consuming in a race. Therefore, the company must have made some significant changes to the controls.

Being the only hypercar that can break performance records while having four seats, the Tesla Roadster wants everyone to think they make it look easy. In contrast, the 2023 Lamborgini will be a two-seater.

The interior of the Aventador is fantastic, with a small touch screen and buttons in the center between driver seats. The controls are for quick racing gear changes, along with electric seat adjustment and power windows.

Since the Tesla Roadster will go into production later than anticipated, Tesla had a chance to improve the body even more. Elon has confirmed that the production car will look even better than the ones unveiled.

The Model presented at the Tesla event in 2017 had an aggressive sports car physique while maintaining an overall Tesla-esque smooth shape. It is wide and low with sharp dagger-like headlights.

The car comes with a removable glass roof and integrated spoiler. The second-generation Tesla Roadster makes the original look like a toy.

Lamborghinis have always been coveted for their amazing aesthetic qualities. However, the final form of the Aventador is something else. The 2023 Aventador body is timeless and made up of a balanced combination of elegant and aggressive lines.

The front fins combine into the lateral air inlets, making the car look more aggressive at the front while fulfilling a practical purpose. The engine cover is modeled after the Lockheed Martin F-35 Lightning fighter jet.

Tesla is an All-American brand that started in 2003. It is a testament to how American the company is that over 60% of its car sales happen here. Tesla also holds 90% of the electric car market in the US and Canada. Buying a Tesla is a patriotic choice.

In comparison, Lamborghini is an Italian brand. The company is known for its artistic colors and stylish cars. The company was birthed when the founder having the same name, faced issues with his Ferrari.

After its unveiling in 2017, the standard Tesla Roadster was valued at $200,000 and the founder’s Edition at $250,000. However, after the delays and inflation, the company removed these prices from the website.

We expect they will announce a new higher price before the launch. So far, we can only say that the car will cost more than the originally quoted prices.

The Lamborghini Aventador is one of the most expensive on the market. The 2023 model will cost you more than $500,000. There is a world of difference between a quarter of a million and more than half a million dollars. The price of the Lamborghini puts it in its own league.

The people who race cars will want the ones with the best performance regardless of the price. At the same time, collectors and investors don’t have a problem dropping big bucks in anticipation of a bigger payday.

Racing enthusiasts may gravitate towards Tesla to dominate the track, while investors might want to hedge their bets and buy the more popular Lamborghini.

In a nutshell, when comparing the Tesla Roadster vs Lamborghini makes sense if you notice the following:

Lamborghini has been around forever and is more popular. The Tesla Roadster has four seats, while the Lamborghini only has two.

The Lamborghini is more expensive than the Tesla Roadster.

Lamborghini is an Italian brand that has collected many loyal fans over a substantial period. You’ve seen its luxurious supercars and hypercars in movies and heard about them in songs.

They have their own subculture among supercar owners. Many car investors collect Lamborghinis with fervor.

Tesla started with their first generation roadster and made waves as the first electric sports car producer. We saw them move on to building electric cars that outperform supercars, talking about the Model S Plaid here.

Tesla is about to enter the upper echelons of production car manufacturing. Will the multimillion-dollar hypercars be able to keep Tesla’s lightning pace? Only time will tell.