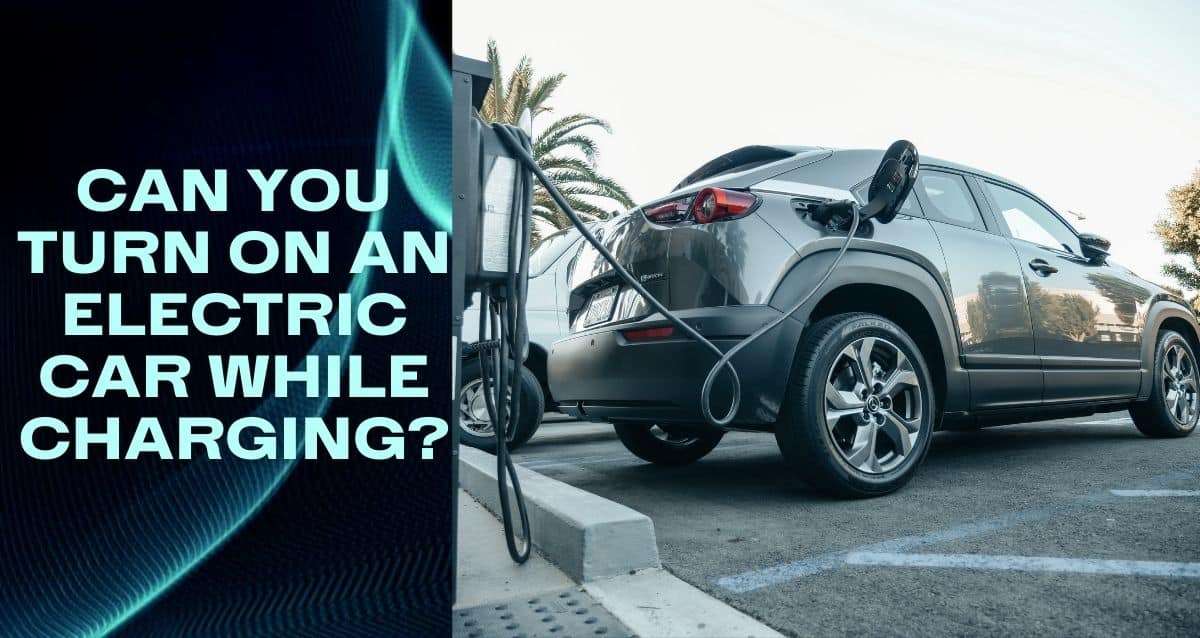 Most people know they should turn off their cars before filling up with petrol. However, is it safe to start an electric vehicle that is plugged in and charging at the same time?

The outlet or connection you use to charge your electric vehicle (E.V.) is the primary factor that determines how quickly it will charge, while the charger itself can also affect the amount of time it takes.

There are three distinct types of outlets and connections, which are detailed below, starting with the one that is the slowest:

You will most likely charge at Level 1 or Level 2 of intensity on a routine basis. Most homes and garages contain a few 240V outlets to power heavy-duty power tools and appliances.

However, if the only outlet you have access to is a 120V socket, merely putting it in before you go to bed will either allow you to charge it to its maximum capacity or provide you with enough power to get you through a few days’ worths of commutes.

Level 3 chargers are the ones that are typically found at filling stations in public settings. Because they require a lot of specialized technology to charge at the rapid rate that they do, installing one in your house can be pretty pricey.

Level 2 outlets are the bare minimum that should be installed per our recommendation if you decide to have any electrical work done.

How Long Does It Take Electric Cars to Charge?

Because plug-in hybrid vehicles (PHEV) only run as fully electric sometimes (and have a far shorter range when driving solely on electric power), their battery packs are significantly smaller. It takes longer for larger battery packs to charge than for smaller ones.

When the market for electric cars began to take off, one of the most common complaints was that there were not nearly enough charging stations.

Chargers are ubiquitous today, and a new model is released every week. The distances among charging infrastructure are significantly shorter, and in general, there are a wide variety of locations from which you can choose to power up your vehicle.

This infrastructure is going to keep expanding and improving over time.

Also read: Can You Plug an Electric Car Into a Regular Outlet?

Charging stations for electric vehicles are beginning to increase in the U.S. Everyone in the community has now become aware of the arrival of a charging station.

You can look for them in the parking lots of grocery or hardware stores, shopping malls, petrol stations, or fast-food joints. You can also find them online.

As the USA continues to transition more and more toward electric automobiles, we will continue to witness an increase in the number of charging stations installed all over the place.

Process of Charging an Electric Car

Electric car owners typically connect their cars to an electrical outlet if they leave parked for a lengthy period. That implies that car owners usually charge their vehicles at their homes or places of work to ensure that the battery always has enough charge (although public charging stations are available when needed).

When owners of electric vehicles are forced to go farther than the range of their cars, they will be required to use remote rapid charging stations to ensure that they do not run out of power before they reach their destination.

The process of charging an electric vehicle is not overly complicated. Putting a cable into the car to connect to a charging source is required. Installing a charger solely for charging at home yields the most reliable results.

Even though it is possible to charge an electric vehicle by plugging it into a regular outlet with three prongs, the process takes much longer and is considered by many experts to be less safe.

Can You Turn Your Electric Car on While Charging?

You would probably have pondered whether it would be possible to start your electric vehicle while it was still charging.

It won’t be a problem if you start driving your electric car while still charging. While the vehicle is being charged, you can use extras like the radio, the information and entertainment center, the warmth, and the air conditioning.

Be advised that the charging process will take significantly longer each time you utilize an additional accessory while the vehicle is being charged.

If you have recently purchased an electric vehicle (E.V.), you may be curious whether it is safe to leave the engine running while the battery is being charged. While you wait for your automobile to finish recharging, it would be good to have some infotainment or temperature monitoring, wouldn’t it?

Electric vehicles, on the other hand, can have their engines running while they are being refueled, unlike gas-powered automobiles.

Electric cars are more comparable to mobile phones in the sense that they can still be used even when they are plugged in. There is no risk involved with starting your electric vehicle while it is being charged, so there is no reason to avoid doing so.

You can use whatever function in your home—your entertainment system, your air conditioner, or anything else—to make the time you must wait more tolerable.

Do People Turn Their Electrical Cars on While Charging?

In practical terms, it’s not unheard of for drivers of electric vehicles to use the remote starter on their cars while charging to get the climate control system ahead of schedule.

When it comes time to disconnect from their electronic devices and face the open road, they will be able to rest easy, knowing they will have a positive experience.

Turning off your mobile device entirely is unnecessary for it to charge when you connect it to a power source. In a similar vein, you can continue using your phone even while it is charging.

The same principles apply to the operation of an electric car. Even though this is a significantly larger object being charged with significantly higher voltages and currents, the concept remains the same.

While it is being charged, the vehicle can be started and driven. Be advised that the car will take significantly longer to charge fully while using electricity.

Can You Drive an Electrical Car While Charging?

It is also essential to remember that even while you can start an electric vehicle even as it is being charged, you cannot drive it while it is in this state.

When you start your car, its systems will monitor how it is actively being recharged as you get ready to drive. In that case, the vehicle will not allow you to go away from the scene.

You will receive a notification informing you that you cannot drive the car at this time because it is charging. This is because you cannot leave while the car is still attached to the station, which might potentially cause harm to both your vehicle and the charger.

Check out: Can You Charge an Electric Car From a 13 AMP Socket? [8 Informative Motives]

Can You Sit in an Electric Car While Charging?

You might be curious whether it is risky to remain seated inside an electric vehicle while it is being charged. While being charged, the car is subjected to high voltage and relatively large amounts of current.

Is there a possibility that this could influence someone sitting within the vehicle while it is being charged? Would it be possible for the charger to electrocute somebody present in the car if something went wrong with the charging system?

Most individuals may sit in their vehicles without risk while their batteries are being charged. People who want to sit in the car when it’s being fueled with high voltages and high currents do not put themselves in a particularly dangerous situation because of this situation.

Electric vehicles have undergone extensive research and development to ensure their passengers’ well-being. Even if there were to be a significant malfunction in the charging mechanism, you would not be electrocuted and suffer any other adverse effects.

Whoever uses electrical medical equipment falls into the category of people who shouldn’t sit in an electric car while it’s charging. A pacemaker is a medical device that falls under this category that is most frequently seen.

If you look in the manual that came with your vehicle, you will find a warning that says if you own these devices, you should not be sitting in the car while it is charging since it could cause an accident.

They strongly advise against getting into the car or the trunk at any time while the device is charging to retrieve or put anything away.

Does an Electric Car Charge Slower if it’s Turned on?

Unfortuitously, your vehicle’s charging will proceed slower with the more devices you have connected to it. If you are not in a rush and have lots of time on your hands, it is perfectly acceptable for you to use as much energy as you see fit.

If you want your electric car to charge more rapidly, you should turn off the engine while it is charging. Although it may be more convenient to wait in your vehicle while it is being charged, the heating and cooling systems consume significant power.

This added amenity will only frustrate you if you are looking for a rapid charge. To pass the time, you could visit one of the local shops or restaurants in the area. If you let the car charge without consuming any electricity as it comes in, you will save a significant amount of time for yourself.

Remember that driving your electric vehicle while charging will extend the time it takes to recharge the battery fully, so plan accordingly. One more time, this is very similar to using your phone. If you use it while it is charging,

it will take significantly longer to reach a completely charged condition after it is finished. A common concern among early adopters of electric vehicles was a shortage of public charging outlets, but the charger is now omnipresent, and new models appear every week.

The distances between superchargers are substantially shorter, and there are various locations to charge your automobile. This infrastructure is only going to get better and better.

You may like to read more on electric cars: